This fall season, for the first time in my life, I have learned to like shiitake mushrooms, which are also known as black mushrooms in Traditional Chinese Medicine (TCM).

I have always loved ginger too—it settles the stomach and warms your insides—doesn’t it? In this broth, the ginger mellows into a savory, umami-rich stock with the qualities of a fuzzy, warm blanket.

Speaking of umami, to make this broth you simmer dried kombu seaweed and shiitake mushrooms together for about an hour.  Then you strain it out, and continue with a few more Japanese seasonings, like soy sauce and miso. 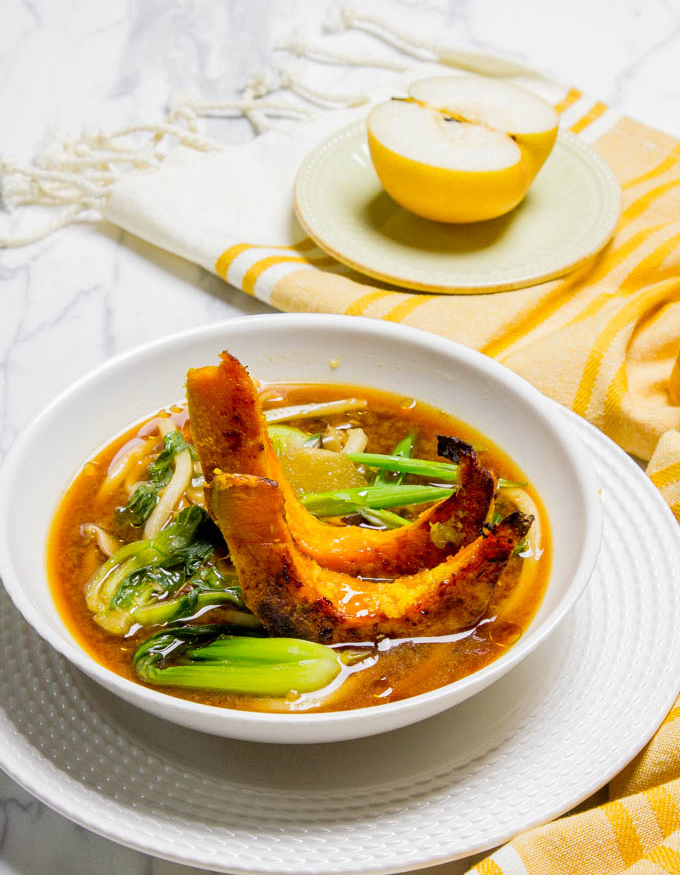 Both kombu and shiitake mushrooms are rich in umami, which is the name for savory flavor.

Umami, the flavor, was coined in the early 20th century by a Japanese scientist whose investigation into the unique flavor elements of kombu seaweed led to his discovery of glutamic acid.

This umami-flavored amino acid is most commonly found in dried, cooked, fermented, and aged foods.

So hopefully this helps you to imagine the pleasing and rich flavor of this broth. 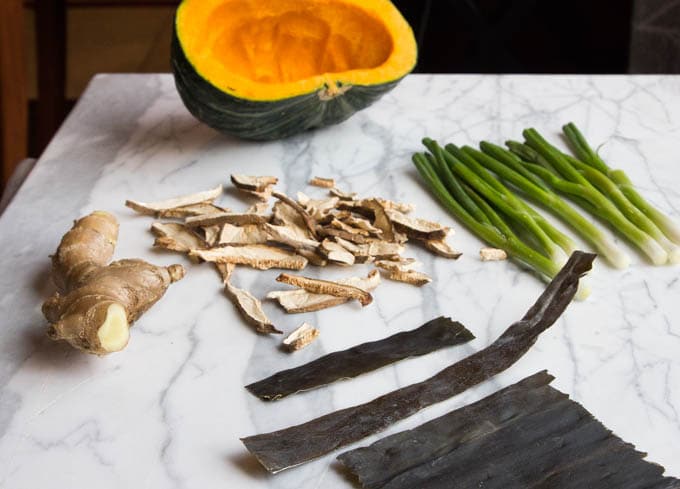 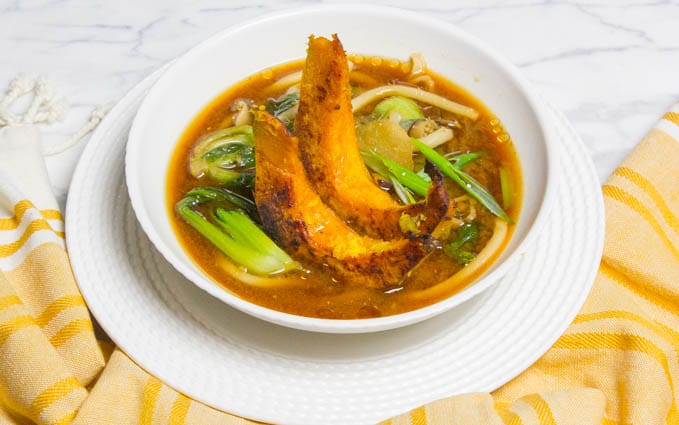 I suspect a few of you reading this were attracted by the Udon noodles in the name of the recipe. Who doesn’t love udon noodles?

I am talking about those thick, wheat flour noodles you get in Japanese soups and yakisoba stir-fry. They are nice and chewy, and wholly satisfying.

You can purchase udon noodles these days from Amazon, Asian grocery stores, and even natural food stores.

Another ingredient you may be unfamiliar with is mirin. This is a type of rice wine similar to sake.

It is slightly sweet, which comes from fermentation. If you are sensitive to alcohol, be sure to look for that on the bottle (different amounts on different brands), or try to find mirin without alcohol, because it does have some.

If you wish to substitute the mirin, try a bit of rice wine vinegar, and teaspoon of sugar.

For those who are unfamiliar, miso is a Japanese paste made from fermented rice, barley, soybeans, and sometimes other grains. The type of miso you purchase determines the unique ingredient mix.

Red miso is made from soybeans, barley, and sometimes other grains. It is dark in color due to a longer fermentation process than other miso, such as brown rice miso, chickpea miso, mellow white miso, sweet white miso, and barley miso. 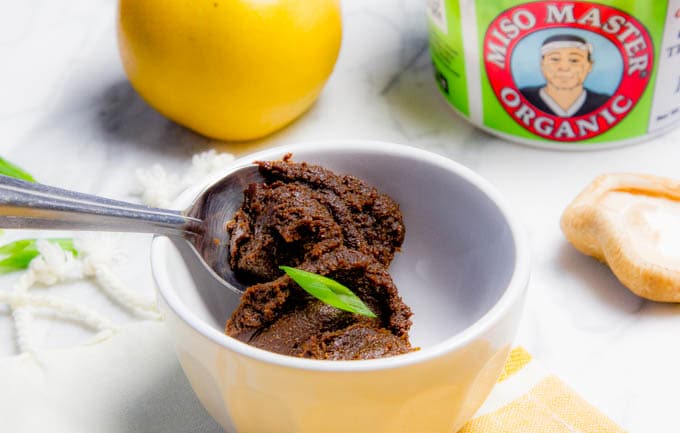 The Miso Master organic traditional red miso I used in this recipe is aged for twelve months in a four-ton hand-crafted Cypress, Redwood, and Fir barrel, according to the company’s website. It is pretty amazing.

The rich umami flavor of a red miso is perfect in this shiitaki-miso broth with udon and ginger.

After all, as I shared with you above, there are some bold flavors in this soup, and so it can handle a strong miso.

It is even wonderful the second day, as my dinner just proved to me. I could hardly imagine something more satisfying.

Many people are familiar with butternut squash, or maybe even acorn squash, but many of my friends are unfamiliar with kabocha squash.

For me though, there is hardly a day I would not prefer kabocha squash over any other option. I did not know before that it is actually a Japanese squash. 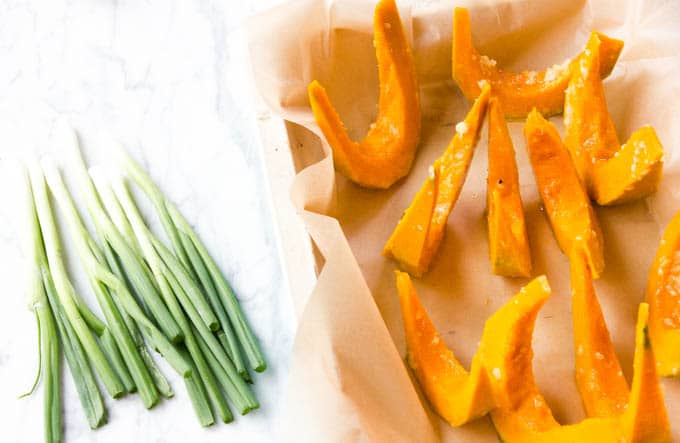 The color of kabocha is a deep, fiery orange. The texture is meaty, kind of like a sweet potato, and satisfying, much dryer than the comparatively watery butternut. The texture is what I really love, and I think you will too.

In this recipe, the squash is peeled, cut into three-quarter-inch thick pieces, tossed with vegetable oil and minced ginger, and roasted with salt.

In terms of sweetness, this squash is just a tad sweet. It’s lovely in this recipe together with bok choy, scallions, Asian pear, and fresh shiitake mushrooms.

Asian pear may be another unexpected ingredient, but I assure you it is wonderful. Asian pear is crispy and firm; not at all sweet. In the soup it is texturally a little crunchy, depending on how long you cook it for.

If you are looking for a lunch or dinner that is an antidote for the colder weather—something hearty, yet light at the same time—this is the soup for you! 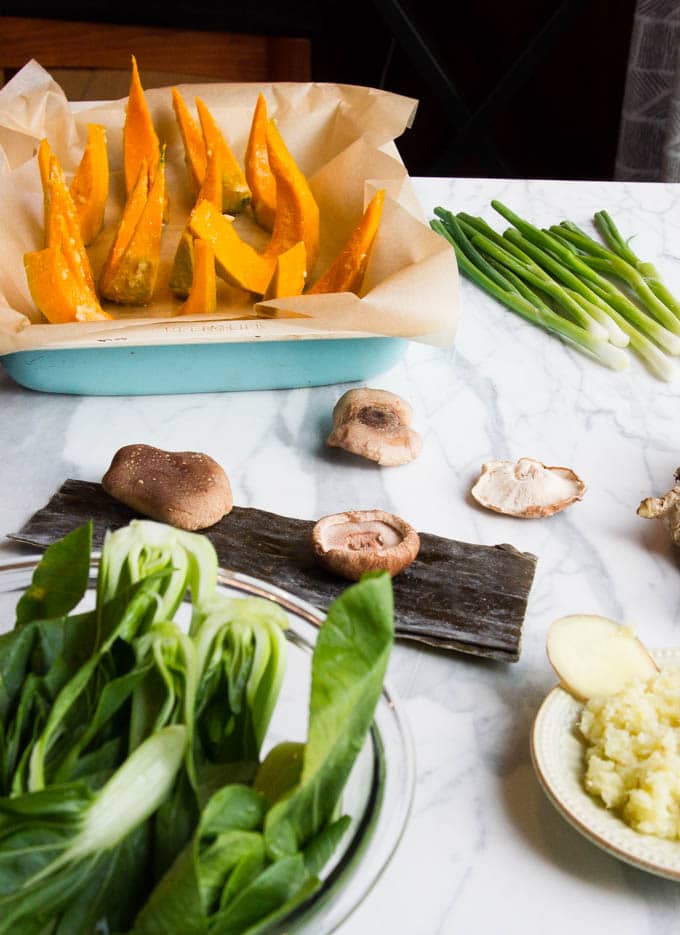 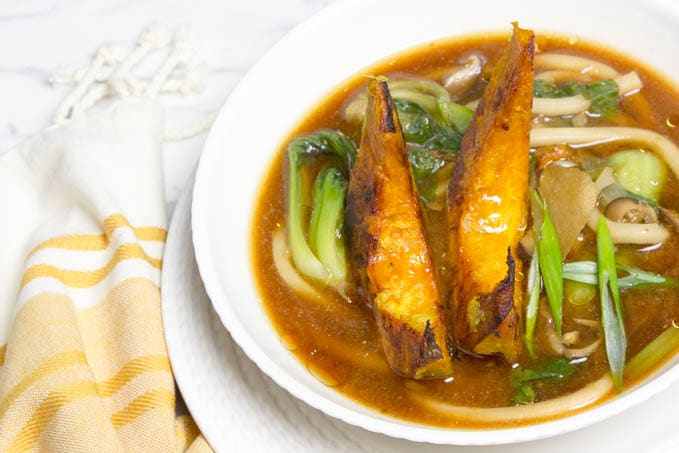 Did you make this recipe? Let me know your thoughts in the comments below.

Hi. My name is Andrea. I started Buttered Veg to help others find balance through mind-body cooking. If this makes you smile, you are definitely in the right place.   Learn More...
Previous Post: « MSG’s Spectacular Return Is Just Getting Started
Next Post: Mostly Traditional Ratatouille, Ready In An Hour »
0 Comments
Inline Feedbacks
View all comments