Making paneer tikka is a rewarding experience for the senses.

From layering in the spices with the yogurt while making the marinade, to the welcome, wafting aroma of the punchy hot and sour spices sizzling in the natural sugars that ooze out of the vegetables as they roast in the oven, expect to feel the nurture.

Similar to a souvlaki or kebab, you marinade the ingredients first in spiced yogurt, thread them onto a stick, and then roast at high temperatures to get flavorful charred edges that burst with flavor.

All you need for this recipe is a fresh, simple cheese (paneer), vegetables, such as bell peppers, onions, and tomatoes, Greek yogurt, and spices.

Paneer is made from pressed cheese curds. It’s a wonderful source of easy-to-digest protein, healthy fats, and nourishment.

Since this is a vegetarian food blog, and I am vegetarian, I am using paneer, but you could substitute the paneer with chicken.

Chicken tikka is a very popular option at Indian restaurants, and now you can make it at home.

Keep reading. I’m going to show you exactly how.

More than 14 different herbs and spices

Indian recipes are known for their abundant use of aromatic herbs and spices, and this recipe is like the granddaddy of all that.

There are no less than 14 spices listed in this recipe, and some of these are spice masalas, which refers to a mixture of many spices. This means there are upwards of 20 different spices.

Wow right? No wonder the flavor is so exciting!

Now, before you decide this recipe isn’t for you, let me assure you that you can leave out whichever spices you don’t have.

I have separated the spices in the recipe between the ones that are more common and easier to find, and the more exotic options.

I encourage you to go ahead and make the paneer tikka with the spices you do have, and it will still taste amazing.

I will highlight for you that the fiery red color of the marinade comes from Kashmiri red chili powder, which has all the brilliant color, without all the heat.

Kashmiri red chili powder is very mild chili that is only slightly more heating than paprika, which is my recommended substitute.

I always want to encourage you, because I want this recipe to be accessible to you, and not just another pretty thing someone else makes.

I’m here to help you to be a rock star cook, and I’m telling you that can do this!

Next, you cut up the paneer and vegetables into large pieces that you can thread onto skewers.

If you don’t want to bother with skewers you can leave this step out.

I would use the skewers only if I were having guests and I wanted to impress with that visual. Otherwise, it’s probably not worth the effort.

Now it’s time to combine the marinade with the paneer and vegetables. Let that rest for 1 hour or longer, such as overnight in the fridge.

Finally, it’s time to roast it. Roasting is going to take about 20-25 minutes.

Make those skewers, or simply spread the vegetables onto a baking tray lined with parchment paper.

We’ll bake at 425 degrees Fahrenheit for about 12 minutes until lightly browned, turn once, then finish roasting on the other side until baked to perfection.

I recommend cooking the tikka in an oven, but you could also sauté the marinaded pieces in a skillet, or grill them.

Paneer is the world’s simples cheese. It is made with two ingredients: milk and lemon juice.

The lemon juice curdles the milk, separating the curds and the whey. Then the curds are pressed into a block.

Paneer can easily be made at home, or it can also be purchased at an Indian or natural foods grocery store.

Once you’ve obtained it, there are millions of fun things to do with paneer, such as add it to a soup or stew.

This recipe for vegetarian stew with protein is also wonderful with paneer.

Like I said before, you could substitute the paneer with chicken pieces. 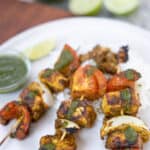 Make the marinade and prepare the vegetables

Regular whole milk yogurt Greek yogurt is already thick. If your yogurt is not thick, put 1 cup regular whole milk yogurt in a fine mesh strainer with a bowl underneath and let it sit for 30 minutes or more to drain excess water and thicken it. Other cooking methods It is also possible to cook the tikka in a non-stick sauté pan. After you assemble the skewers and brush them with oil, place them in a large pan on medium heat. Turn the tikka frequently so that they brown evenly. * This recipe is based on this one by Spice Up The Curry 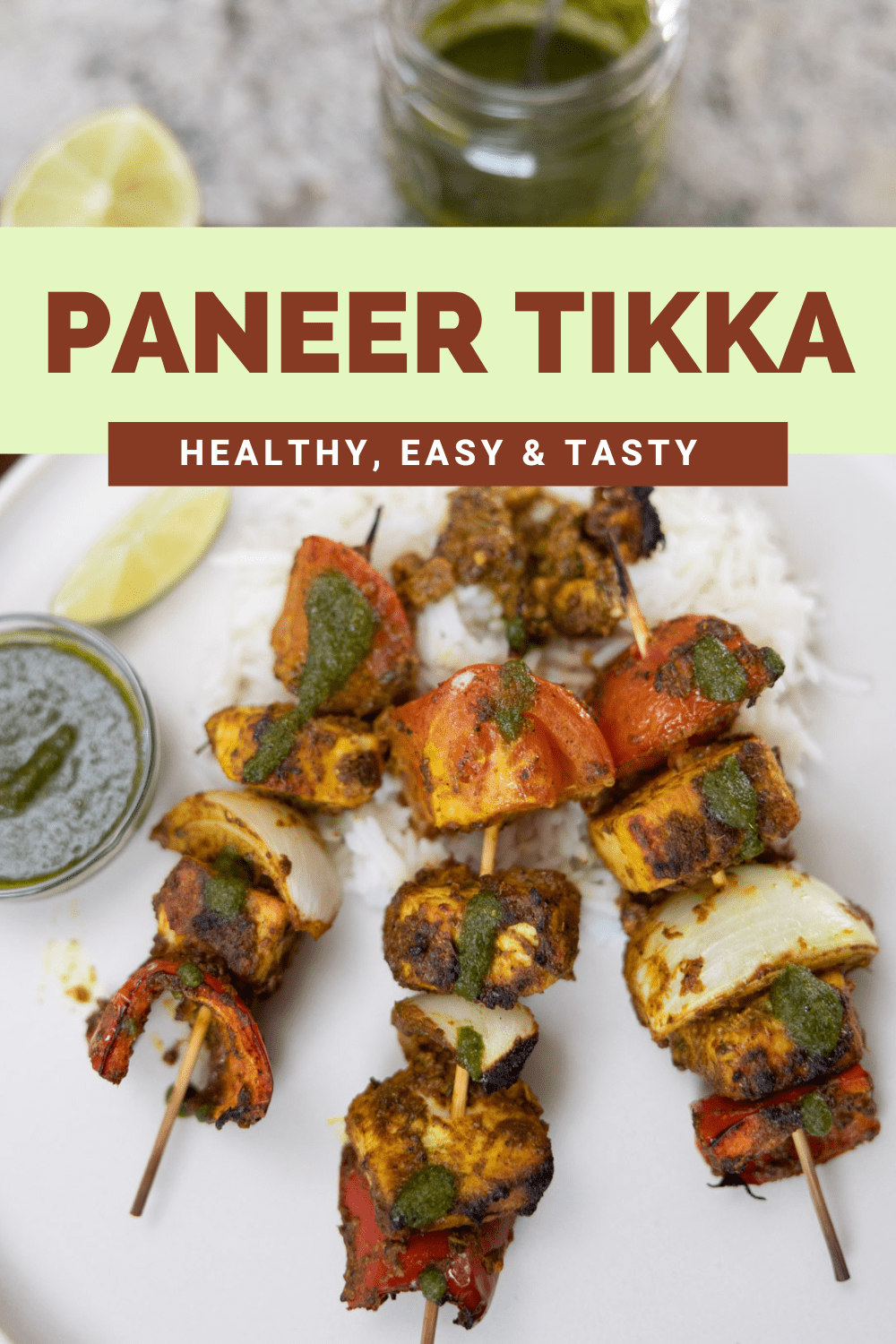