Turmeric teas, turmeric lattes, turmeric “golden” milk, and turmeric elixirs are trending in America these days. This is a good thing. But what makes the consumption of turmeric root meaningful to me is its incredible history as a natural medicine. 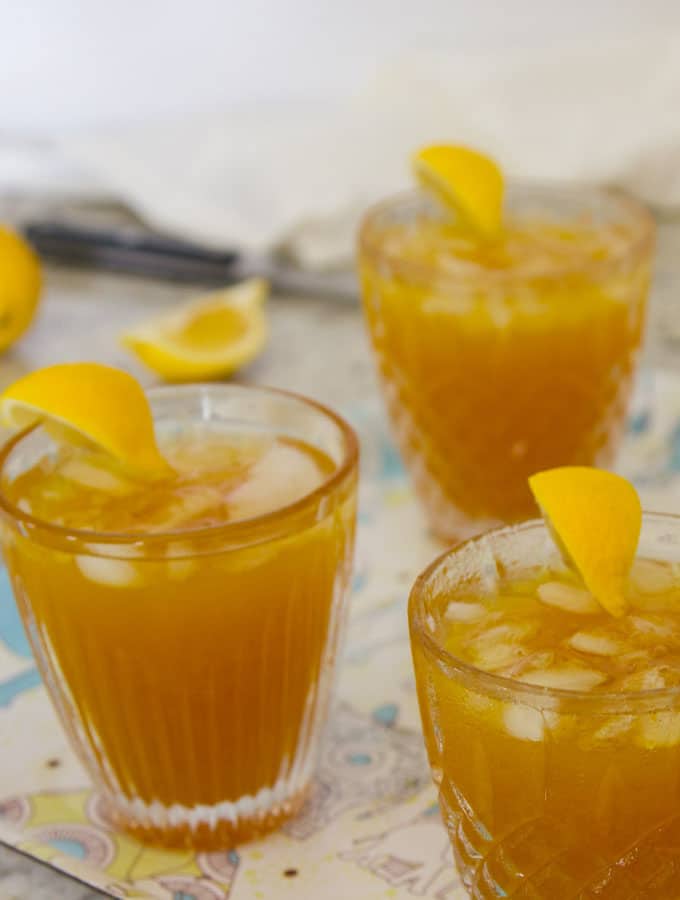 In Traditional Chinese Medicine, turmeric has a long history of use in treating abdominal pain.

Actually, the list of ailments turmeric helps would be enough to fill a thick book. The benefits of turmeric are vast. I believe it is very fitting to call it a cure-all.

The Benefits Of Turmeric

Turmeric is unique in that it is one of the few food-as-medicine foods to be studied extensively by modern scientists.

Scientists’ interest is primarily in curcumin, the primary active ingredient in turmeric.

There is substantial proof that curcumin is effective in reducing inflammation. This is very good news, since inflammation happens to be rampant in the world today.

I believe this property is very, very important, and reason enough to make this turmeric elixir recipe and enjoy more turmeric.

Inflammation is a factor in allergies, asthma, autoimmune diseases, cancer, hepatitis, diabetes, inflammatory bowel disease, kidney disease, osteoporosis, and many, many more conditions that ail us. 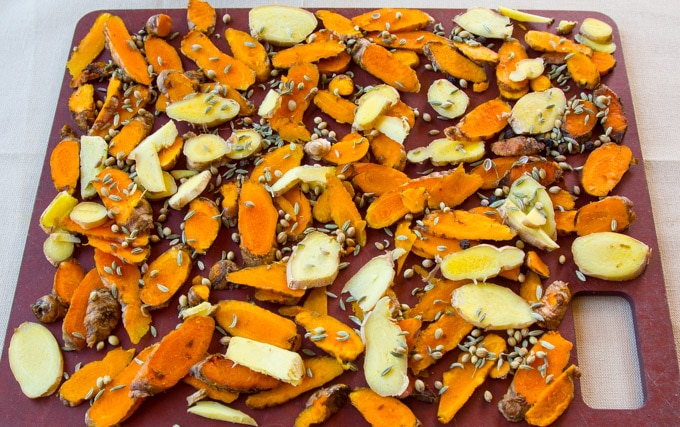 The second major property in turmeric is as a cholagogue. This property stimulates bile production in the liver and encourages excretion of bile from the gallbladder, which improves the body’s ability to digest fats.

Since the average modern diet tends to be high in fat, this is a much needed medicine.

Turmeric’s third major property is as a potent antioxidant, which helps to protect cells from damage and keep us healthy.

If you are interested in pursuing turmeric as medicine for a specific ailment, you should consult with a doctor before ingesting large amounts of it in capsule form.

In the meantime, you could test the effect of turmeric on your health by trying my turmeric elixir cure-all recipe, or by adding it to your food.

Benefits of Turmeric In Food And Drink

In India, where 80 percent of the world’s turmeric is consumed, people mainly consume it in their food.

You can read my post about how I followed my father-in-law’s advice to this effect, and about how I have learned to love turmeric in food.

Many of the recipes on Buttered Veg incorporate turmeric. I like to think of turmeric as a canvas that supports other flavors. 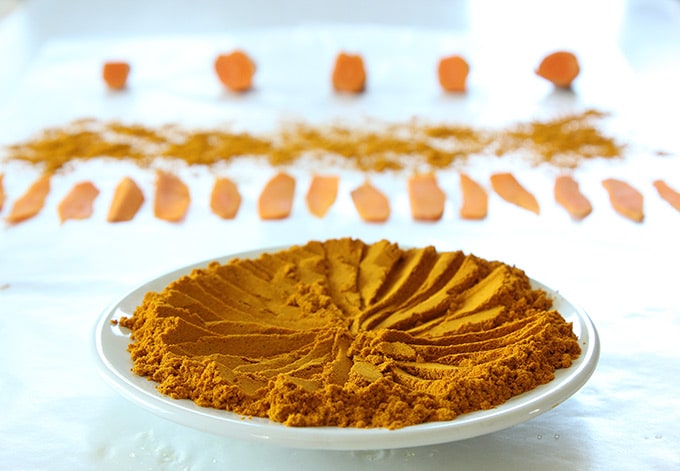 Turmeric is a root belonging to the same family as ginger.

It is golden orange in color and tastes mildly pungent and bitter. In my opinion, the bitter flavor is so mild that you hardly taste it.

In food and drink, turmeric generally improves digestion and reduces gas and bloating. What is not to love?

Why You Should Make This Turmeric Elixir Cure-All

When I drink turmeric elixir cure-all, I experience it as clean, balancing, and cleansing to my mind and body.

The elixir feels like it is healing my every cell. It is the most refreshing thing after being outside in the garden and feeling hot.

It is my go-to drink when I need nourishment and a pick-me-up.

Each of these ingredients add to the gentle healing properties of the elixir, and turn it into a general cure-all. 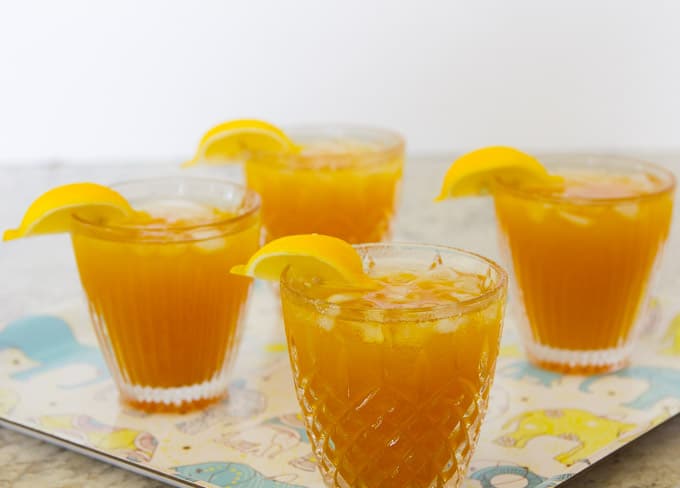 Ginger: In the same family as turmeric, ginger adds pain relieving qualities to the drink.

I think most people know that ginger is great for alleviating nausea, but it is also helpful for headaches, upset stomach, and chronic pain.

Black Peppercorns: The addition of black peppercorns aids the body’s absorption of curcumin, the active ingredient in turmeric, by 2,000 percent.

Coriander and Fennel: Both of these spices are cooling, and fennel has a sweet anise flavor. Including them in the turmeric elixir helps to balance out the warming qualities of the turmeric, ginger, and peppercorns.

These spices also boast some of the same anti-inflammatory and digestive benefits as turmeric.

Lemon Juice: Both fresh, and mouth-puckering, this ingredient adds dimension to the overall flavor of the elixir, and adds a host of beneficial healing qualities, most notably as a digestive aid.

Raw Honey: I am a firm believer in raw honey, and Ayurveda also supports its use.

I believe that honey obtained locally is a great way to taste your floral environment, and perhaps attune to it. Some people say it helps with seasonal allergies.

Honey is also a powerful source of antioxidants, with antibacterial and anti-fungal properties. It is helpful for digestion and to sooth the throat.

Just make sure to never cook honey, as it destroys the beneficial qualities and makes it toxic to the body. It is okay to add honey to hot water and dissolve it, which is what we do when making the turmeric elixir.

I bet you won’t find an easier, or more delightful way, to add this much healing power to your diet in one shot.

Are you ready to give it a go?

When it’s done you’ll have a jar of golden goodness in your fridge to enjoy as you wish.

It is a gentle enough medicine that you do not have to worry about serving it to friends and family. With this recipe, you can treat them to something wonderful.

I would limit a single serving to half a cup to start though, just in case, until you know how the body handles it.

I also suggest making a double-batch, since you are going to want to drink lots of this.

Fresh turmeric root is increasingly available. I get it at an Asian supermarket, but places like Whole Foods also sell it.

Or you can buy it on Amazon. I've given you some options below, so no excuses for you now.

Turmeric is a powerful traditional medicine that is generally considered safe when taken by mouth or applied to the skin for up to 8 months.

However, people with bile duct obstruction, gallstones, bleeding problems, diabetes, or stomach problems should consult a doctor before taking turmeric.

I would just like to say here that drinking turmeric elixir or consuming turmeric as part of your regular diet should never be a problem. This is the historical use.

Problems are more likely to occur when you try to take large amounts of turmeric as a supplement. 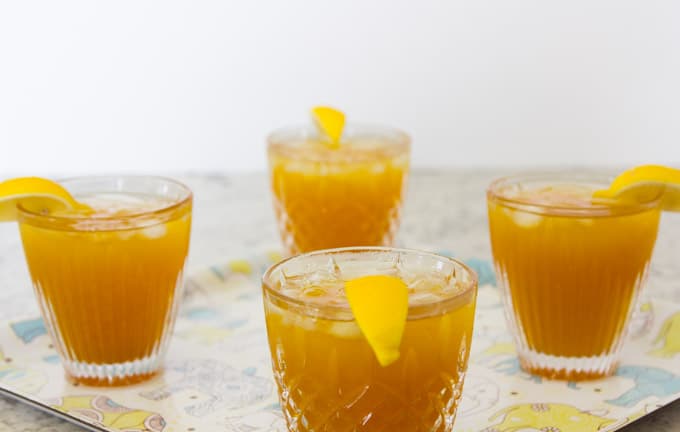 Pin
Share
Tweet
143 Shares
« How To Clean, Season, And Maintain Your Cast Iron Skillet
What Is Mind-Body Cooking? »

Hi. My name is Andrea. I started Buttered Veg to help others find balance through mind-body cooking. If this makes you smile, you are definitely in the right place.   Learn More...