Paneer Tikka Masala is the vegetarian equivalent of what is probably the most popular Indian dish in America: chicken tikka masala.

A major Indian food manufacturer in the U.S. told me that their chicken tikka masala product accounted for 70 percent of the company's sales!

You could say Paneer Tikka Masala is a fancy name for a mildly spiced, flavorful tomato sauce, dotted with cubes of paneer cheese.

It is usually eaten with basmati rice and a flatbread, such as naan or roti. The overall taste is a little sweet, which is likely one of the reasons everybody likes it.

Another reason I think a lot of Westerners love this dish is because ... errrr ... we invented it—or should I say the British, India's former colonial rulers, invented it.

It is natural to adapt flavors to suit one's own tastes. Westerners tend to love garlic, and tikka masala is made with garlic. This may not be notable, except that garlic is generally not used in Indian cooking.

Another interesting fact is how this dish is loved by children. At first this was surprising to me.

Dassana Amit, of the blog, “Veg Recipes of India,” recommends this dish for children. Contrary to our understanding that children don't like spicy food, there is the issue of exposure, and apparently children love many flavorful foods if given the opportunity to try them.

Lisa Sohanpal, co-founder of the Canada-based award-winning Nom Noms World Food, a manufacturer of world cuisine for children, explained to me a couple of years ago that children love variety. Who knew?

Paneer Tikka Masala is just one of hundreds of Indian dishes made with the unripened Indian cheese known as paneer.

Sometimes compared to cottage cheese, paneer's texture is firmer. It's high in protein and combines well with all kinds of vegetable dishes.

You can purchase paneer online, or at an Indian store. I have seen it at Whole Foods, so it may also be available at other natural foods stores. It is also simple to make at home.

All you do is separate the milk curd from the whey by adding a bit of lemon juice to hot milk. Then you press the curds into a block. It could be the simplest cheese on earth. Brilliant!

And for my vegan readers, or those who don't have easy access to paneer, simply substitute the paneer with tofu. The butter in this Paneer Tikka Masala can also be substituted with olive oil.

In addition to butter, a tikka masala is traditionally made with cream. In this recipe, cashews are used to create a creamy consistency.

I always like it when I can incorporate nuts into my dinner, because nuts are a quality saturated fat, and a source of vegetable protein.

Although saturated fats have been shunned for many years, it is now more widely understood that saturated fats are necessary for brain development, liver health, immunity, and healthy hormones. What is key is to obtain quality sources of saturated fats, and consume them in moderation.

Many sources of saturated fats are also filled with nutrients and minerals. Such sources are particularly important for vegetarians. Raw cashews are high in protein, fiber, copper, manganese, phosphorus, magnesium, thiamin, Vitamin B6, Vitamin K, iron, potassium, zinc, and selenium.

Oh, wow! Please excuse my cashew tangent! It continues below. Feel free to just skip to the recipe if you like 🙂

Skip to the Recipe

About cashews, I recently dined with a gentleman from Brazil who enlightened me to the way cashews grow. I did not know, and at first, I did not believe him!

This picture shows the proof! Those are cashews growing out of the end of that fruit!

Cashews grow on a tropical evergreen tree native to northeastern Brazil. The cashew is actually the seed of an edible fruit, and the seed protrudes out the bottom. The cashew is inside a shell and needs to be processed to be edible.

The fruit is known as a cashew apple, or cashew fruit. The large fruit is sweet and slightly astringent. In Brazil it is used to make liquor and fresh juice.

India is also a major producer of cashews, but the cashew apple is seldom used. The fruit goes to waste because it is highly perishable without refrigeration, and rural India lacks refrigeration.

I read that India’s scientists and entrepreneurs are working to find ways to unlock the potential of the cashew apple. Talk about a potential food source! I will definitely be watching for this, and waiting for the day I can get my hands on a rare cashew apple.

Thanks for reading to the end. I hope you will try out this recipe.  I worked hard on this one to get the balance of flavors just right, and I think you will enjoy it. 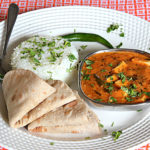 Add to the tikka masala sauce

To sauté the paneer

To finish the paneer tikka masala

Paneer can be purchased online, or at an Indian store. I have seen it at Whole Foods, so it may also be available at other organic or natural foods stores in your neighborhood. Paneer does not melt like other cheeses, so there is no other cheese substitute. If you do not have paneer, try using tofu, or substituting a vegetable instead.

If you do not have kasoori methi, substitute with celery leaves, or something bitter, such as a bit of radish or dandelion greens.

Be mindful of the four large pieces of green chiles in the paneer tikka masala. Remove them before serving if possible, or warn others. If this chili gets bitten into, it will be spicy. For more details, visit my Guide to Indian Ingredient Substitutions.

If you want to make this recipe vegan, substitute the paneer with tofu, and substitute the butter with coconut oil. Alternately, use mixed vegetables, such as carrots, green beans, cauliflower, zucchini, and green peas.