Raita is an Indian condiment of savory yogurt comparable to a salad in Western cuisines. Both serve as a balancing, cooling element in the meal.

Raita is popular throughout India, served alongside flavorful rice dishes, curries, and flatbreads. According to NDTV (New Delhi Television), a simple raita can be seen in every household in India. 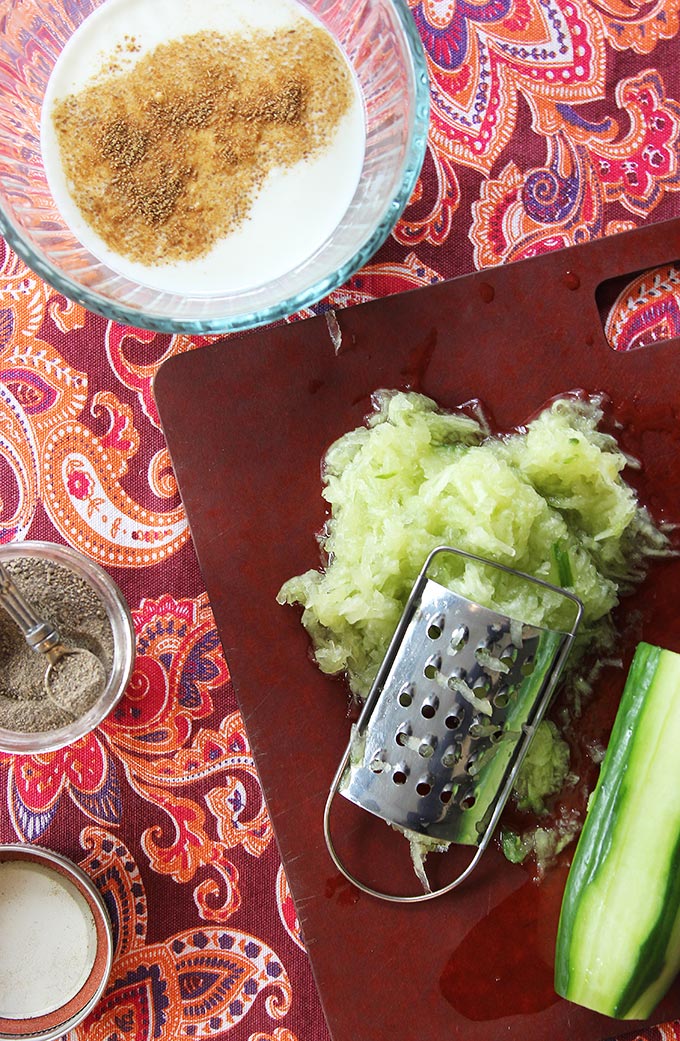 A raita is great for cooling down the pungent spices in Indian food, especially if your tastebuds are sensitive.

I particular enjoy raita with a spiced rice dish, such as a pulao, biryani, or pilaf. I think it is because the chewy texture of the rice balances nicely with raita’s silky feel. I’ll have some recipes for you on this coming soon, such as my Garden Tomato Rice with green chilis.

A raita can be made with many varieties of vegetables, fruits, and spices—with pineapple, tomato, beetroot, banana, potato, pumpkin, eggplant, and more—but a simple cucumber preparation is the most common. 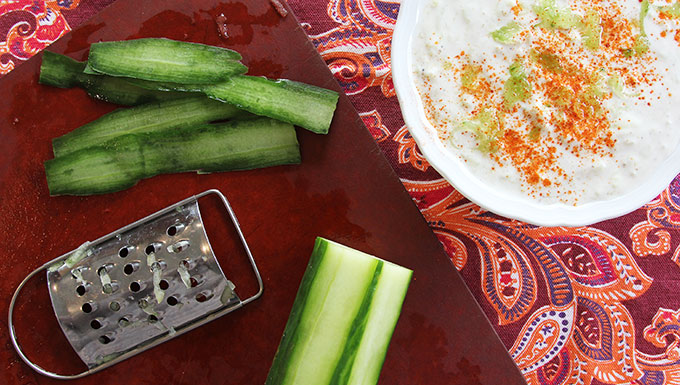 Yogurt for dinner may sound like a crazy idea for those of you who are used to having it for breakfast. The scope for yogurt is changing and broadening more than you might think.

Savory yogurt is becoming more popular in the United States as brands try to expand their market reach, but it isn’t such a bad idea. In fact some traditional cultures have been enjoying savory yogurts for millennia.

In Persian cultures, a thin yogurt, flavored with shallots or walnuts, and a very thick cultured yogurt known as labneh, can be found on the table for breakfast, lunch, and dinner.

A local company in Brooklyn, White Moustache, is trying to revive its Iranian traditions with a beautifully thick, small-batch Persian yogurt with flavors like sour cherry, date, and honey-walnut. It does look amazing! I tried a similar yogurt recently, and it seriously tastes like ice cream, except it’s alive and so much better. 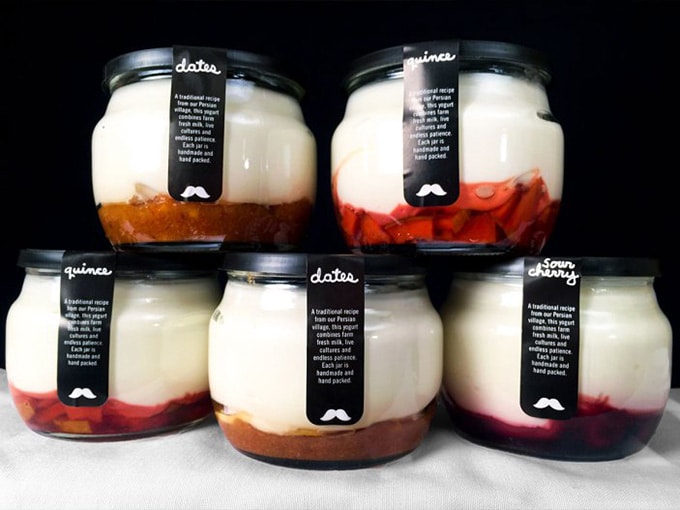 I have to mention the now ubiquitous tzatziki sauce, made from salted strained yogurt, mixed with cucumber, lemon juice, and fresh herbs. This, you’ll find daily on traditional tables in Greece, Turkey, and Bulgaria, alongside grilled meats and flatbreads.

Here in the United States, one of this country’s sustainability leaders, Blue Hill Farm, has a line of vegetable yogurts made with grass-fed cow’s milk.

Flavors include butternut squash, beet, carrot, tomato, and parsnip. Yes, parsnip! People are likening this one to a replacement for sour cream or crème fraîche, or as a base for a flavorful dip. 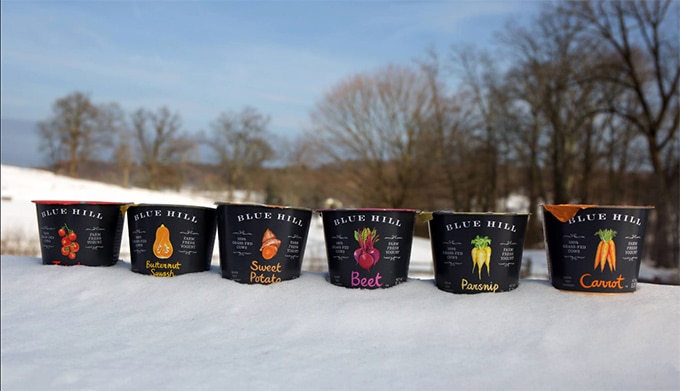 So you can see, savory yogurt is only going to get bigger in North American, and I predict we’ll see more creative uses for yogurts on the dinner table. So let the yogurt renaissance evolve!

In the meantime, let’s turn back to savory yogurt in Indian cuisine. India’s millennia of traditions have a lot to say about the value of savory yogurt.

Maya Tiwari, writing in the Ayurvedic lifestyle guide, “Life of Balance,” refers to yogurt as the “angel of health.”

Ayurveda is a 5,000-year old system of medicine that is said to have been passed down from gods to ancient physicians. The system views diet and lifestyle as integral to maintaining good health.

According to Tiwari, a small quantity of yogurt taken with dinner activates nutrient assimilation, encourages the growth of benign (helpful) lactobacillus bacteria in the intestines, and helps to destroy harmful bacteria. She also says that yogurt is easily digested by the body within an hour.

Yogurt for dinner may sound like a crazy idea for those of you who are used to having it for breakfast, but traditional cultures have been enjoying savory yogurts for millennia.Click To Tweet

My in-laws in India are South Indian, and South Indians typically enjoy a last course of rice mixed with yogurt after every meal.

Like many things in India, this is how they have always taken their food. One supposes it is a very useful thing to cool down the digestive tract and feed it with live bacterial cultures after every meal.

In North America, we are currently in an extended pro-yogurt phase. Maybe it’s because the health-promoting benefits of active-culture yogurts have been increasingly validated by modern science.

Yogurt can be sour, especially certain types, or especially when the yogurt is on the older side.

Some people cannot handle the sour taste very well, and so will reject yogurt. If you are one of those, like me, who don’t enjoy the sour taste, there are ways you can still enjoy the health benefits of yogurt.

In Ayurveda, we would say your bodily constitution would determine the best course of action. My advise is to follow your gut.

Try adding natural sweetness to your yogurt to make it more palatable. You could use carrot, raisin, or pineapple, Or you may enjoy yogurt with spices added, such as a raita. You may just want to consume less of it, or water it down.

Not all people are alike, and not all yogurt is alike as well. The health benefits of yogurt are pretty strong, and so I encourage you to give yogurt a try with dinner.

When you are ready to make cucumber raita, buy a good quality yogurt with active cultures and no additives. For raita, it is best to use a thicker yogurt, so plain, whole-milk Greek yogurt would be perfect. 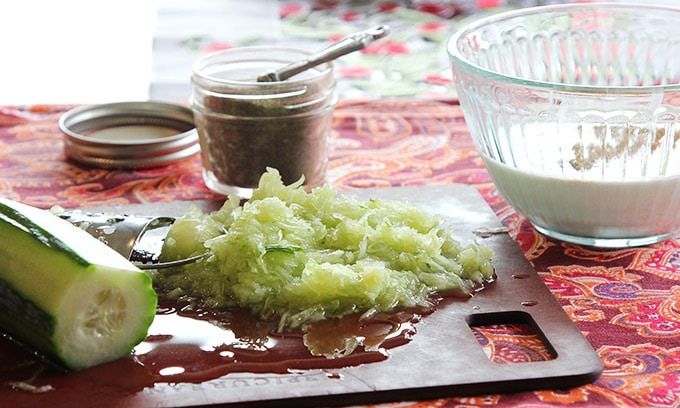 Course: Side Dish
Cuisine: Indian
Keywords: cilantro, cucumber, yogurt
Prep Time: 10 minutes
Total Time: 10 minutes
Servings: 1 cup
Calories: 167kcal
Author: Andrea at Buttered Veg
Yogurt for dinner may sound like a crazy idea for those of you who are used to having it for breakfast, but some have enjoyed it for millennia.
Print Recipe Pin Recipe

Hi. My name is Andrea. I started Buttered Veg to help others find balance through mind-body cooking. If this makes you smile, you are definitely in the right place.   Learn More...
Previous Post: « Braised Baby Turnips & Greens With Turmeric, Garlic & Lime Juice
Next Post: Wheat-Free Chocolate Cashew Cookies Made With Ghee »
0 Comments
Inline Feedbacks
View all comments