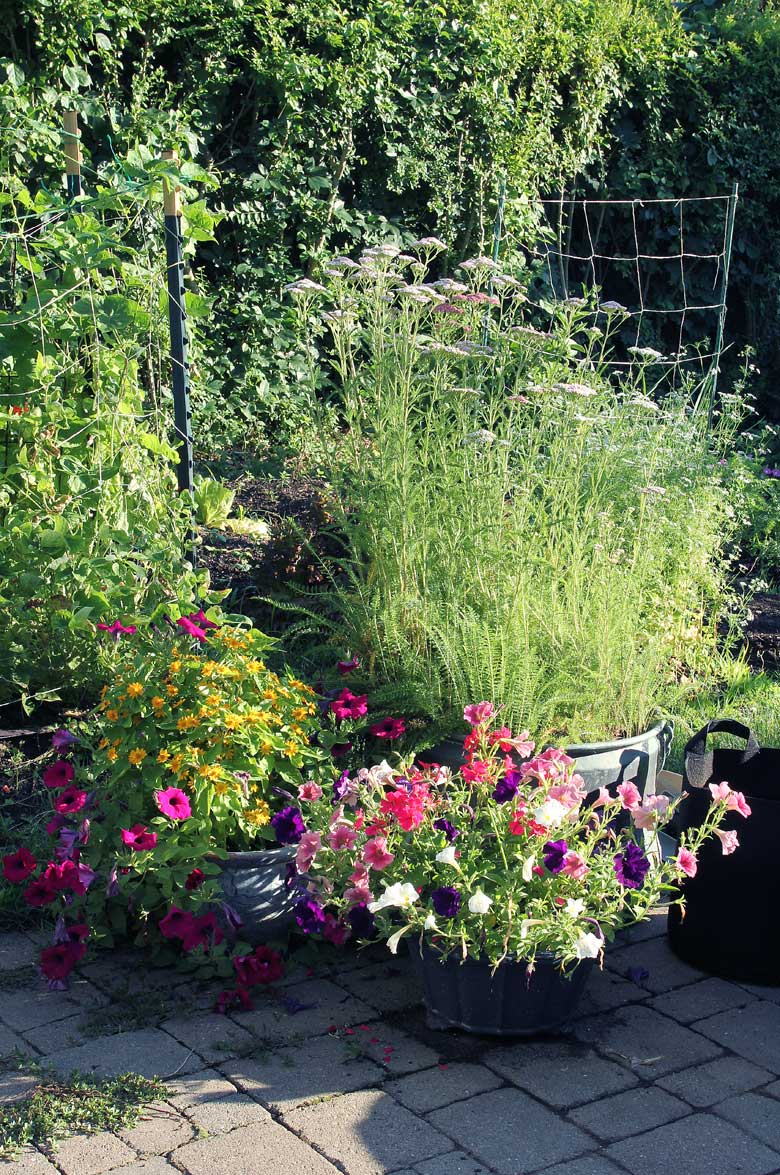 Until you have a lawn of your own, you do not know what it takes to keep it healthy and green. The first summer in our new home, my husband and I were finding out the hard way.

We sought our neighbors’ advice, and spent lots of time at garden centers talking to people who had lawns. Everyone had advice about how to fix our issues.

Our first issue was getting the lawn to fill in. We had a bunch of spots where grass would not grow, and the weeds were moving in.

We bought bag after bag of grass seed and tried to germinate it. We covered the seeds with fresh soil to protect the seeds. We fertilized with chemical fertilizers according to the directions on the bags.

To us, it looked like the chickadees were eating all the seeds, so we spread extra seed, just in case.

The second time we spread seed, a neighbor gave us some hay to spread over it to keep the birds at bay. It didn’t work.

It looked like the weeds would soon take over the lawn, and then I figured we’d be in big trouble.

I sprayed copious amounts of water on the lawn to help the seeds germinate, driving the water bill sky high. Nothing seemed to work.

By late summer, we were overrun with broadleaf weeds, and they were shading out what little grass we had left. The lawn looked like a war zone after a battle.

The weeds were actually starting to scare me. It looked like the weeds would soon take over the lawn, and then I figured we’d be in big trouble. Would we have to start over? I suddenly had a strong urge to do something about it.

Contrary to my character, and everything I had previously learned about living naturally, such as avoiding food with additives, buying organic, natural beauty care, low-tech living, and so on, I convinced myself that buying a gallon of Ortho Weed B Gone was the thing to do. I thought I would only apply a small amount on the biggest patches of weeds.

The next day, I had my giant jug of poison in one hand, and its “comfort nozzle” spray wand in the other. I was ready to kill weeds. I had just pulled the trigger when, from across the hedge in the neighbor’s yard, a woman called out “Hello!”

I stopped. “Hello,” I answered.

“What are you doing?” the woman asked.

“We have too many weeds, and I am applying weed killer.”

She then warned me that I was using poison that would stay in the environment for a very long time.

My response we to ask who she was. (I was thinking to myself, “Who was she to tell me this?”)

Turns out she worked for an organic landscaping company. Our new neighbors had hired it to take care of their lawn.

I shook my head in disbelief.

“Okay,” I said. “I understand it’s poison, but what do I do about the weeds? They are taking over my lawn.”

She said I was in luck because the owner of the company was there, and she would ask him to come and speak to me. I said okay, and in the interim, applied a small amount of weed killer along the edges of the lawn where the dandelions and crabgrasses were most plentiful.

When Jay came over I asked him what I could do about the weeds if I could not use weed killer.

His response astounded me: “Plant more grass, as many varieties as possible.”

Plant more grass? I had tried that.

A diversity of grasses living on healthy soil is the best defense against weeds, he informed me.

I told him I had planted a lot of grass.

He suggested I apply compost to the grass to enrich the soil quality. Jay said if the soil is healthy, it will support healthy grass, and weeds will be deterred.

Soil quality? Now this was really a revelation to me.

I suddenly understood that I did not need to fight with the weeds. What I had to do was support a healthy ecosystem for the grass.

Jay suggested I get my compost from Stone Barns Center for Food and Agriculture in Pocantico Hills, New York. He said their compost is tested for mineral and microbial content and a balanced pH, and that he was confident about its quality.

Although I knew about composting, since I had never had a garden before, I didn’t really understood what it was. I was also not aware that there could be a differences between one compost and another.

After Jay left, I looked up Stone Barns and learned it was only 15 minutes from our house. I also saw they were offering a farm tour the next day. I immediately called my husband and asked if we could go together. He agreed.

Stone Barns is a diverse, sustainability focused, vegetable and livestock farm on a sprawling property not far from the Hudson River. The barns and courtyard were built in the 1930s by John D. Rockefeller and it operated as a farm, and later a dairy farm. The Rockefeller’s donated it, and Stone Barns began running it as a non-profit about 10 years ago.

Stone Barns’ farm produces the majority of the food used at Blue Hill, a world-famous restaurant that shares the property. The fine dining farm-to-table operation is run by executive chef Dan Barber, who also happens to be one of the country’s top influencers in the area of sustainable food systems.

During our visit, I picked up Barber’s book, “The Third Plate: Field Notes on the Future of Food.” While reading it, I became increasingly inspired. 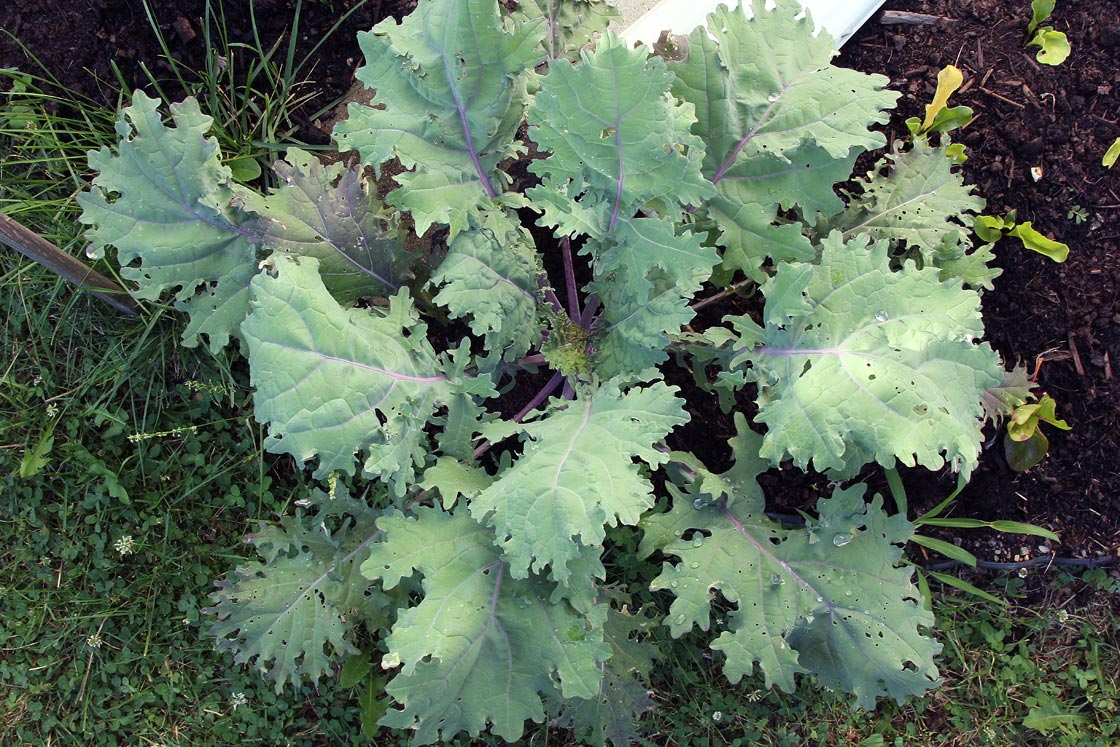 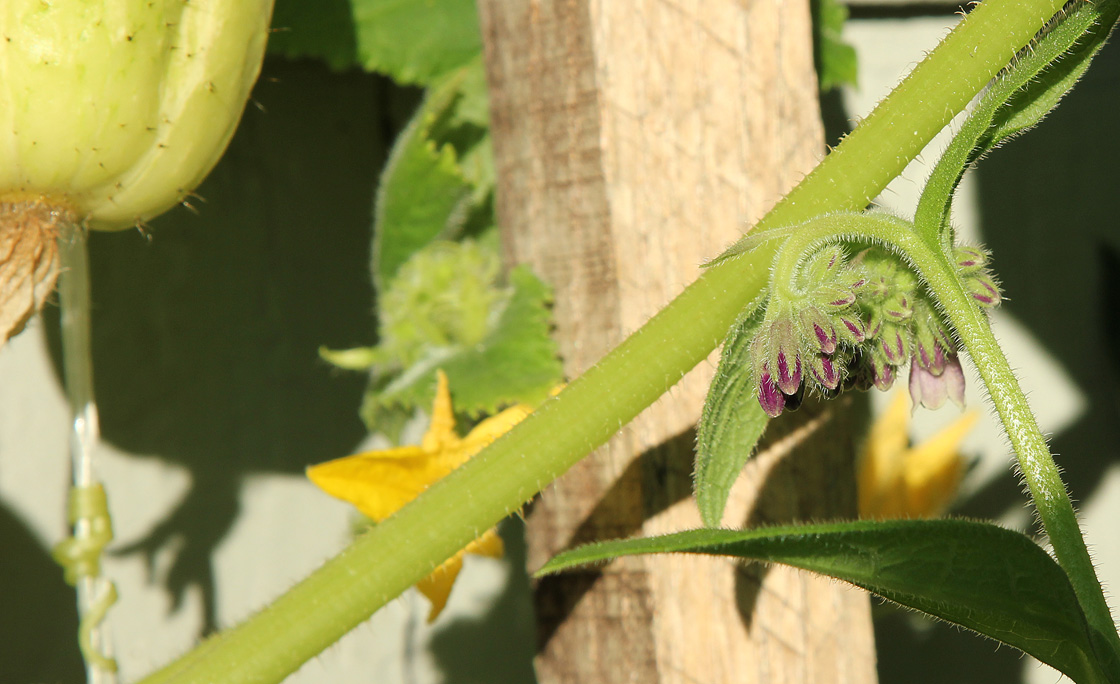 The Third Plate’s vivid prose details Barber’s personal quest for great tasting food. The reader is brought along as Barber makes new discoveries while visiting places where innovation is happening in our food system. Barber asks questions, and learns from the growers and other stakeholders in our edible future.

It turns out that the same people who are committed to producing food sustainably, are also continuously learning.

Reflecting on all this, I understood that as a society we have moved so far away from sustainable living that simple things like not putting poison on the earth have to be learned. We must learn how to care for the earth.

I realized that I am not alone in my ignorance … or is it an unwillingness to change?  A fear of the unknown? Fear of not having enough? Distracted by everything?

I was shocked to learn that many conventional farmers separately grow vegetables organically for their own families. Or they may set aside a pig or cow, and keep it free of antibiotics and growth hormones, again to feed their own families.

Why is it okay to feed poisoned fruits and vegetables, and drugged up meat to the rest of us, if it’s not good enough for your own family? How is it that we accept this way of producing food, when it’s so obviously killing our farmers’ consciences, and destroying the earth that we rely on?

It became clear to me that our current way of living is generally unsustainable. I was determined to do something about it, and change myself.

I decided to take half of our backyard and start a 600 square-foot vegetable garden. I do not know where this effort will lead, or fathom all that I will ultimately learn from it, but my heart said “do it,” and so I did. 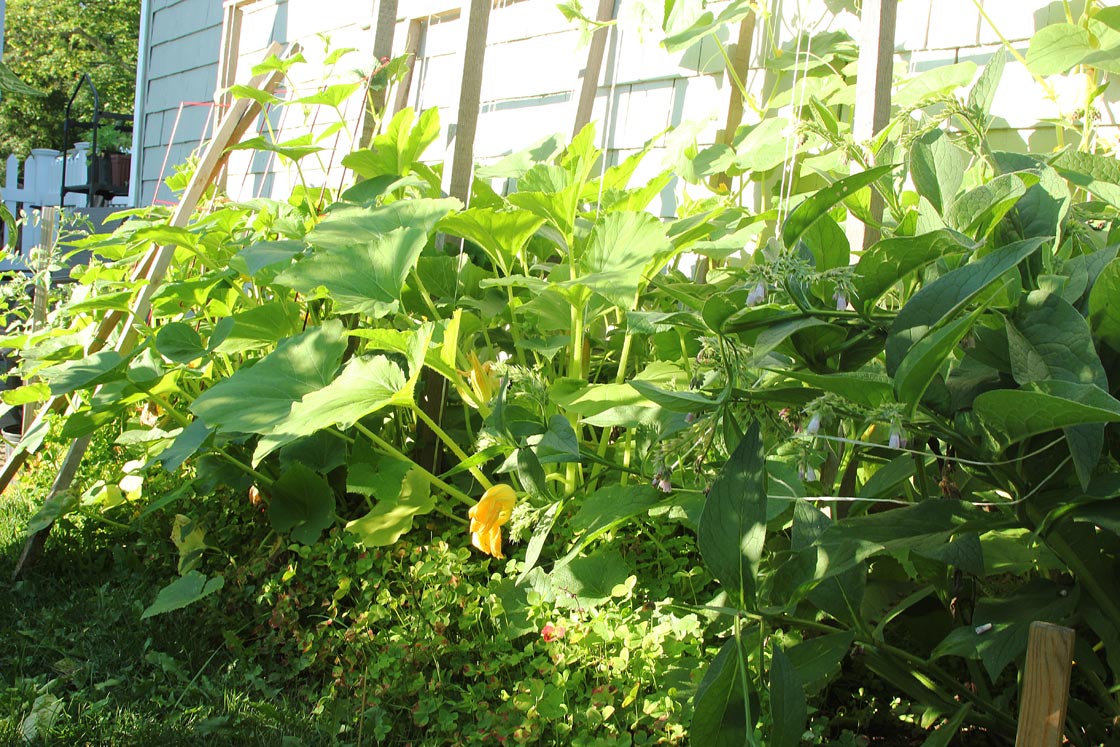 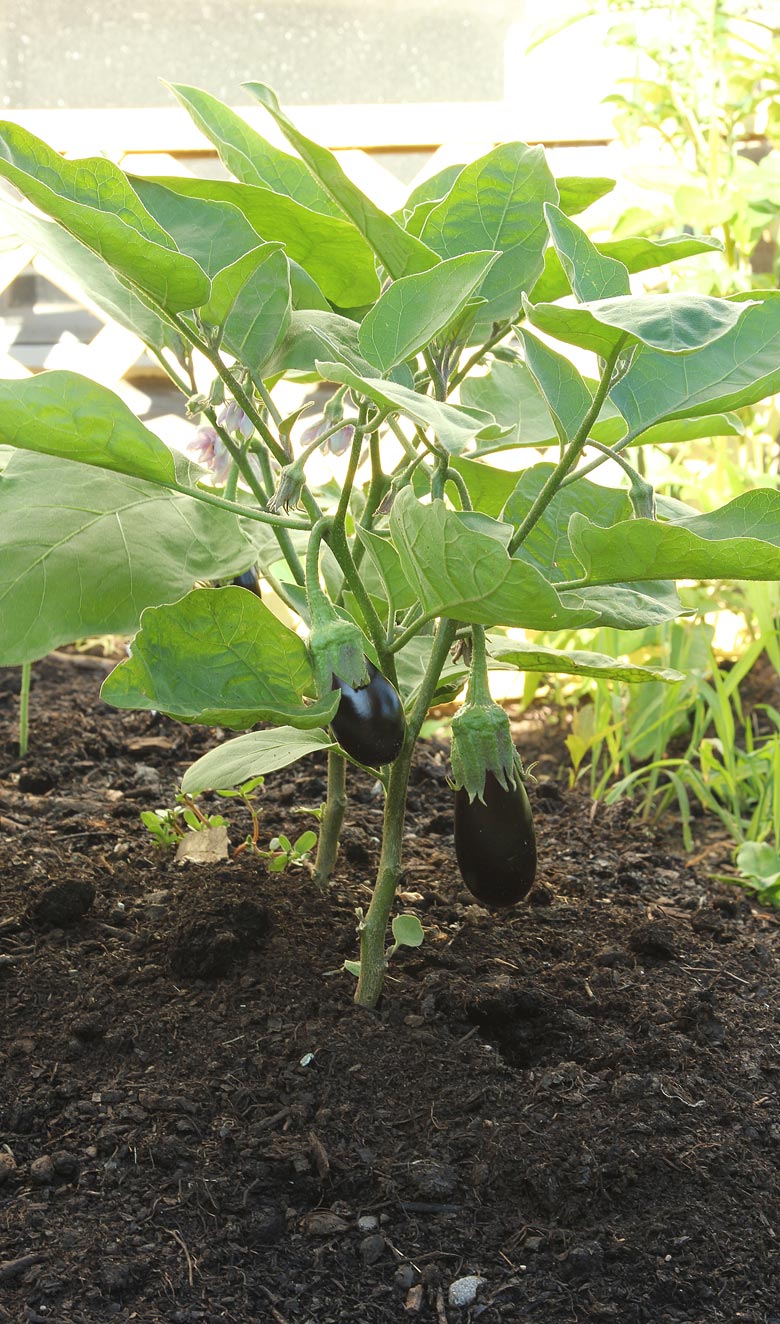 After a lot of research, I decided to set it up like a small scale intensive production farm. The garden has 30-inch wide garden beds, separated by 18-inch pathways. This model was pioneered by Eliot Coleman, now of Four Season Farm in Maine.

A group of people, including Stone Barns’ head farmer, Jack Algiere, have been working to engineer hand tools with better ergonomics that work well within such a farm setup. My plan is to follow in their able footsteps.

I am sure some of the neighbors have thought I must be crazy. That first year, as they walked by, dogs on leashes, they would have seen me incessantly shoveling, pushing my laden wheelbarrow, or lifting organic matter in my hands. Who does this these days?

As for the weeds, I have learned to see them differently. I can eat them, compost them, use them as mulch. or let them grow, as they serve an essential purpose of keeping soils covered. The weeds exist for a reason.

This past year I finally understood that we have dandelions because our soils are compacted. Dandelions have strong roots that help to break up the ground so the teeming underground lifeforms can get oxygen. Now, instead of fearing them, I have to thank the dandelions for doing their job. 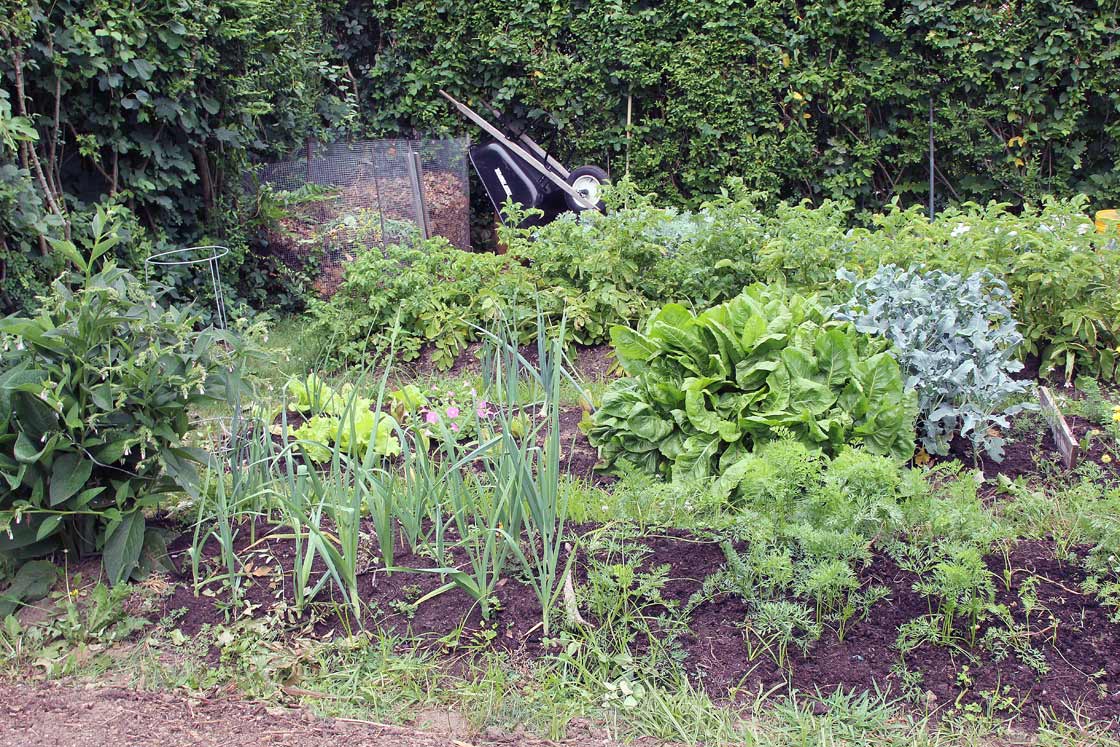 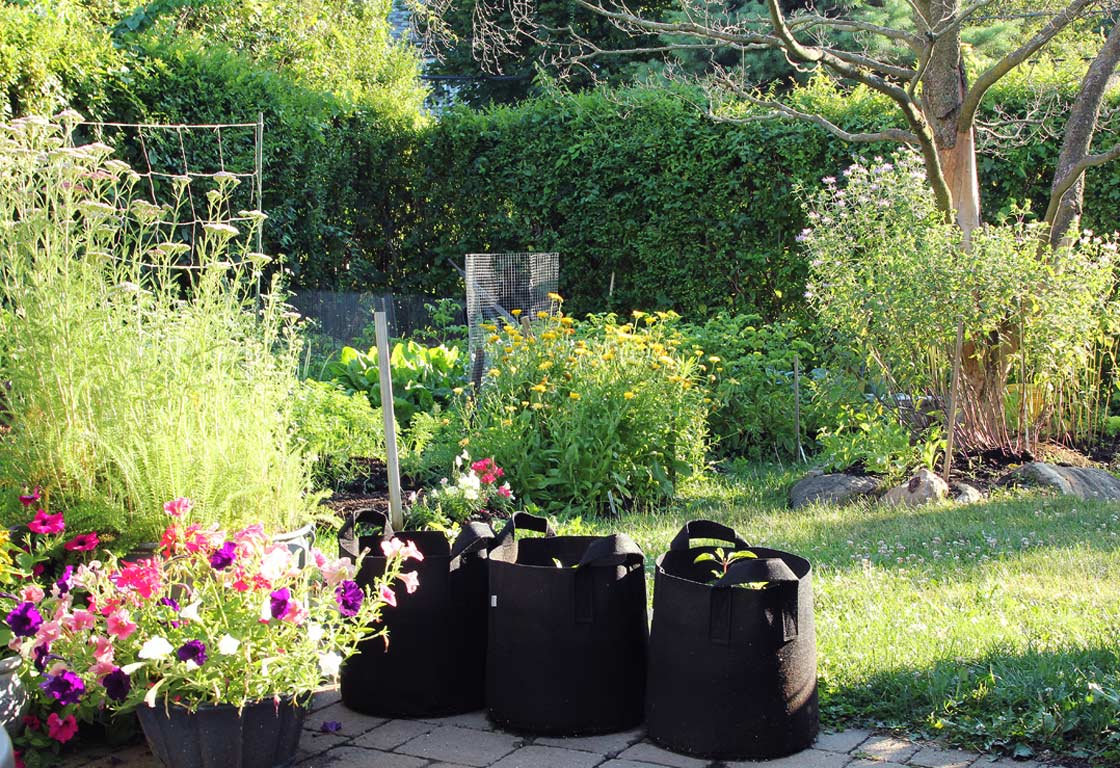 I would love to know what you think about this post, or about anything related to Buttered Veg. Please leave a comment below, or visit my contact page and send me an email.

Want to learn more about vegetarian cooking? Get my free eBook, “Balanced Cooking for Beginners.” Click HERE for the book.

Want to learn more about Indian vegetarian cooking? Get my free Guide to Vegetarian Indian Food.

Hi. My name is Andrea. I started Buttered Veg to help others find balance through mind-body cooking. If this makes you smile, you are definitely in the right place.   Learn More...
Previous Post: « How to Prepare Any Vegetable, South Indian Style
Next Post: How To Cook Dry Chickpeas From Scratch »