This whole wheat paratha flatbread makes ingenious use of just four ingredients—flour, water, salt and ghee—along with a unique folding technique that adds layers, texture, and flavor. It is also a lot of fun to make.

Whole wheat paratha is a great choice to go with a saucy vegetable dish or a bean and lentil dal curry, or both. The layered flatbread tears apart easily, so it can be used as a spoon, which is how it’s done in India.

The wonderful thing about this flatbread is that each bite includes a taste of ghee.

Ghee is an healthy oil made by a process of clarifying butter. Its taste is similar to butter (and what’s not to love about that?) but it also has an added underlying nutty or caramelized flavor.

Did I just describe better butter? I think I did!!

Unfortunately, you won’t be able to substitute butter for ghee, because butter will burn. One of ghee’s attributes is an extremely high smoke point due to the absence of any milk solids or moisture in ghee.

So to make this whole wheat paratha, if you don’t have ghee, and you don’t want to buy it right now, you can still try this recipe with vegetable oil.

Learn more about the 10 Healing Benefits of Ghee

Learn how to make Homemade Ghee

Learn How to Identify Quality Ghee, and Ghee Buying Tips

I learned to make this flatbread from cooks in India. These cooks suggested that one fold the flatbread like a sari.

To me, this is kind of funny. Folding like a sari is something that everyone in India would know, and it is the perfect description, but who else knows how to fold like a sari? What is a sari anyways?

For fun, I am including a photo so you will know. The folds are along the front of the skirt.

To wear a sari, you start with 6 yards of fabric, and somehow you fold it onto your body. It is an incredible process. Don’t worry though, folding whole wheat paratha isn't as difficult as folding a sari 🙂

Outside India, we are more likely to understand folding the whole wheat paratha like an accordion fold.

To make the whole wheat paratha, first you roll out a piece of prepared dough to six inches in diameter.

Then you brush it with a thin layer of ghee, sprinkle flour on it, and fold it up like an accordion so the folds are stacked one on top of each other.

Next, you take your accordion strip, and curl it up. Think about a jelly roll, or how a cat curls up to sleep.

Next, you smush down the curled up roll, and sprinkle it with flour again.

Finally, you roll out the flatbread to 6–7 inches in diameter and it is ready to cook.

While it is cooking, you smother the bread with ghee, and the steam from the heat gently puffs up and exposes the lovely ghee layers as it cooks.

It looks really beautiful. Not to mention the intoxicating scent of sizzling ghee all over the paratha.

For making an unleavened Indian flatbread like whole wheat paratha, it really helps to have the right flour. An average whole wheat flour can be too coarse, so you will want to see my recommendations below.

If you have access to an Indian store, or you will see some Amazon recommendations below, you can buy chakki atta flour, or whole wheat flour labeled “for chapati.” Chakki is the absolute best.

Indian flour is made from hard red, hard white, or durum wheat, and chakki atta is made using a traditional stone mill, which leaves the bran and nutrition of the whole wheat grain intact.

The chakki mill is comparable to stone milling in the West, but chakki atta is milled to an even finer consistency. Chakki atta allows you to get a very smooth, soft, pliable dough.

Introducing The Tava And Belan

Regarding the skillet used for cooking the whole wheat paratha, in India they use what is called a tava.

If you do not have a tava, no problem. You can use a large, non-stick skillet, a crepe pan, a pancake griddle, or so on, and it will work just fine.

A final consideration for equipment is the wooden rolling pin, known as belan in Hindi. When I first saw one it was new to me, but I have since learned that small wooden rolling pins are common in many cultures.

The French rolling pin is probably the most well-known. For some reason I grew up knowing only the giant variety. You know what I mean!

If you haven’t tried a small rolling pin, I recommend it. They are not expensive, and, well, they are just easier to work with. My recommendations are again just below.

These rolling pins are super versatile, and make rolling Indian flatbreads a breeze. Of course, if you don’t have one, any rolling pin can be made to work.

Make the paratha dough and other prep

If you do not have ghee, substitute with a mixture of half butter and half vegetable oil. Ghee is a form of clarified butter with a nutty, buttery taste, that is commonly used in Indian cooking. Ghee is generally safe for people with lactose intolerance. It has a high smoke point of 485 degrees Fahrenheit and it is shelf stable at room temperature. Ghee is widely available outside India. To learn more about ghee and where to buy it, see Quality Ghee & Ghee Buying Tips. 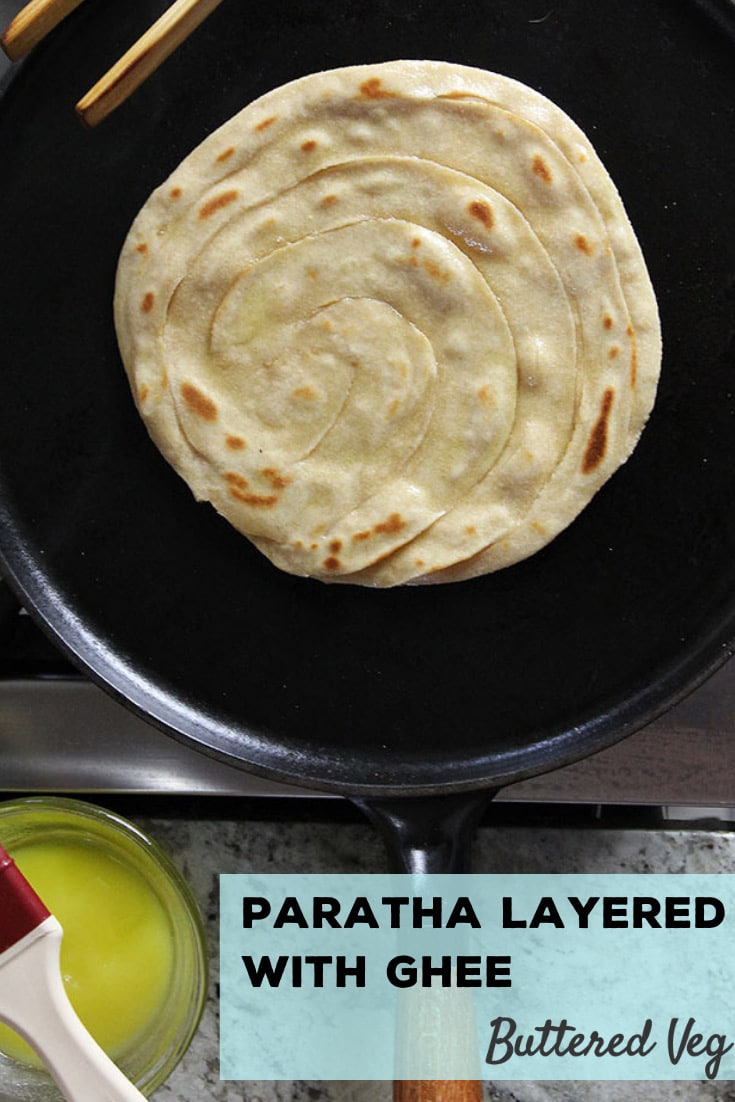