It is hard to think of an ingredient that is more useful than a preserved lemon. It can be the finishing touch on all manner of soups and stews, or that magic ingredient in a salad dressing or pasta. Adding preserved lemons to anything takes its flavor to the next level.

Lemon’s bright sour taste is one of the six keys to flavor that we can’t live without. Those tastes are sweet, sour, salty, bitter, pungent, and astringent. When the six tastes are balanced and present in food, one experiences profound satisfaction.

With preserved lemons the sour taste is elevated into a trinity of complexity that starts with sour, and swirls from there. It is still sour, but it is also so much more.

To make preserved lemons, you slice the fruit from the top into quarters, but leave the base in tact so the lemon opens up like a four-pointed star. Then you fill the lemon with good quality salt, and close it back up.

The salted lemons are then pushed into a glass jar, squishing a bit to release some of their juices. (The salt helps to pull out the juice.)

Once tightly packed in the jar, extra lemon juice is added to top it up. Finally, cover it loosely, leave it on the counter, and wait for about a month until the preserved lemons are finished.

Preserving lemons is to ferment them. Lactic acids ferment the fruit, rendering the peel and all perfectly palatable, and pleasantly heady.

You now have a sour flavor tempered by salt, and complicated by the savory “umami” quality of fermentation.

Your preserved lemon is now an ingredient available for use in everything you would normally use fresh lemon for, except it’s a better ingredient.

There is also no need to worry about the lemons spoiling. Preserved lemons will survive in the refrigerator for a year or more.

Why Should I Bother Fermenting Lemons?

Ahh, fermentation! Why do it? Why care about it? Why include it in our diets? Why bother?

I went to Sandor Ellix Katz for the answer. Katz is an expert on fermentation and author of the encyclopedic book, “The Art of Fermentation.”

For Katz, fermentation is about taking the power back from the industrialized processing machine that “cooks” most of the food we consume in a standard American diet.

“Most food and beverage fermentation processes are ancient rituals that humans have been performing since before the dawn of history, yet we have largely relegated them to factory production,” he writes.

“Fermentation has mostly disappeared from our households and communities. Techniques evolved by disparate human cultures over millennia, through observation of natural phenomena and manipulating conditions with trial and error, have become obscure and are in danger of being lost.”

Katz encourages readers to experiment with fermentation by offering principles and examples of different fermentation techniques, rather than explicit recipes.

It is amazing to read through his book and read anecdote after anecdote about someone who tried fermenting X in such and such way, and also to realize how fermented foods exist in traditional cultures all over the world, even today.

Yet, we hardly know about many of these traditional recipes. They truly are in danger of being lost. So it is inspiring to think of all the possibilities we could return to the plate if we have the will.

By following the principles of fermentation, it is simple to imagine using up any and every surplus vegetable or fruit grown in our local areas. You don’t need to use an imported ingredient at all. And fermented lemons are the one of the absolute easiest to make.

There are also abundant health reasons why it makes sense to add fermented foods to the diet.

I admit, I am of the belief that nature provides for us, so if it is something we consumed for thousands of years due to the necessity of preserving food, then why wouldn’t it still be good for us?

Think about it! Scientists have only recently discovered the vast microbial life that exists in the human body, what is called the human microbiome.

I wrote about this for Epoch Times from the perspective of new opportunities for food manufacturers to “sell” us on feeding our microbiome.

The fact is, the non-human cells we harbor inside us outnumber human cells ten to one. So feeding these cells with things they love, which includes fermented lemons, isn’t a farfetched concept at all.

You can read more about this in my post, "Why the 2,000-Year Kimchi Tradition is Here to Stay." Kimchi is another easy-to-make fermented food made from vegetables like cabbage and radish.

A Long And Short History Of Preserved Lemons

Buttered Veg is about traditional food, and it hardly gets more traditional than something like this.

Preserved lemons have been enjoyed at least since the 12th century, where the extraordinary condiment originated in Algeria, Tunisia, and Morocco, according to Mary Ellen Snodgrass, author of the Encyclopedia of Kitchen History, quoted in Serious Eats.

Preserved lemons are most popularly associated with Moroccan cuisine as an ingredient in tajine, a slow-cooked savory stew made from meat, vegetables, spices, nuts, and dried fruit, and cooked in an earthenware pot.

Food writer and author Paula Wolfert is credited with popularizing the recipe for preserved lemons in America with her 1987 cookbook, “Couscous and Other Good Food from Morocco.”

It has been a short history in America, but that means there is still loads to learn and experiment with.

How To Cook With Preserved Lemons

The recipe for preserved lemons is basically the same everywhere you look.

Some cooks embellish the basic recipe with spices, such as cinnamon sticks, cloves, spice berries, red chilis, black peppercorns, and coriander seeds. Feel free to experiment with different spices if the idea of these flavors excites you.

I prefer to keep it simple, using just lemons, good quality salt, and fresh lemon juice. This way you have maximum use from the lemons as an ingredient in your pantry.

This is my second batch of preserved lemons. The first batch got used up in pasta cream sauces, salad dressings, cold pasta salads, chutneys and salsas.

As an ingredient, preserved lemons are salty, sweet, sour, and savory, so anywhere you feel a complex flavor would heighten the taste you can try it.

One thing I will suggest as an improvement on the basic recipe is to chop up the lemons after the preserve is ready, so that you can easily scoop out a spoonful to add to your meal, rather than chopping it up each time since it is kind of sloppy and messy. You could also remove any seeds at this stage.

The entirely of the preserved lemon is edible, including the peel. Between and skin and the flesh, the taste is different. So you could separate the two, or use only one or the other parts of the lemon in a dish.

Another consideration is the salt. Some people rinse off the salt before using the lemon. You could also do this, or you could account for the extra salt in your recipe. Taste the preserved lemon and get a sense for how salty it is. Then you will have a better idea of exactly what it adds to the recipe.

Any citrus works for this method of preserving with salt. I have photographed lemons and limes for you that I made today. The chopped lemon is actually preserved Meyer lemons that I made a month ago, and it is now ready. Meyer lemons are more sweet, and generally only available in the U.S. between November and April.

Now, its is your turn. Are you ready to give preserving lemons a try?

It is fool-proof and easy to make fermented lemons. This recipe gives a wonderful introduction to fermentation, and it comes with a big reward, as fermented lemons are infinitely useful as a pantry ingredient.

How about including bits of salty lemon on crudités, or as a topping for fish or chicken if you eat meat? I think you will find the possibilities are indeed, endless. 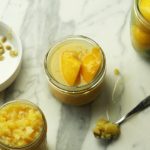 Since you will be eating the peel, organic lemons are recommended.