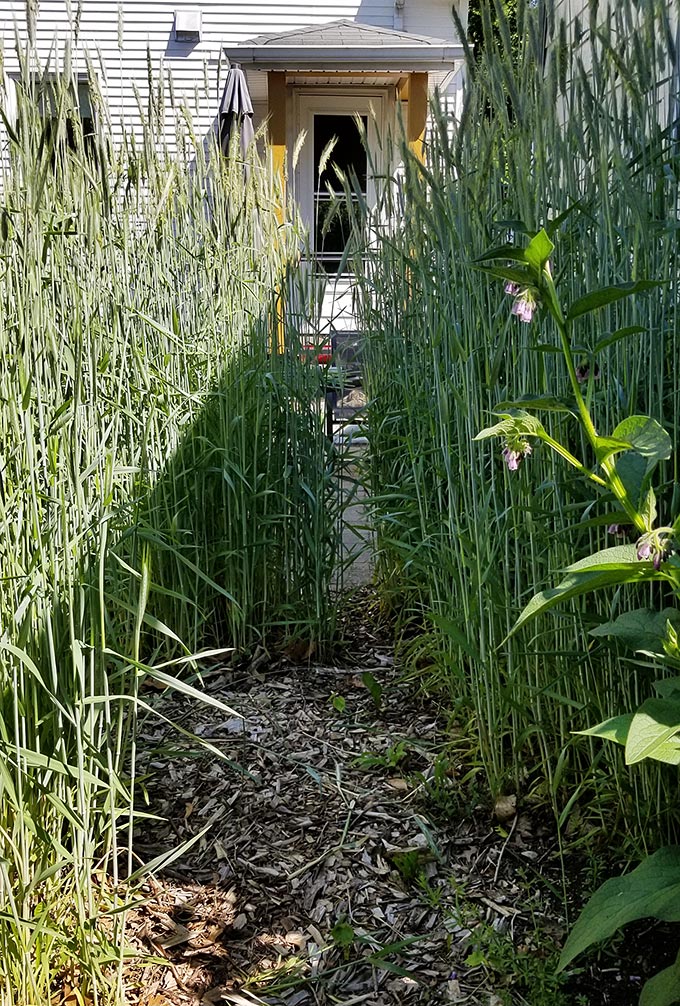 I have a modest backyard garden, but I am running it like a farm. I guess that makes me a wannabe farmer - haha.

So this notion is what compelled me to plant rye grass as a cover crop. The so-called craziness of this concept actually led to some consternation when speaking with other gardeners, who feel the idea is just too much, wrong even!

Why would you use the soil to grow something that you won’t eat? Isn’t that just using up the soil’s fertility for nothing?

These are common questions. Another is, doesn’t the soil need a rest over the winter before replanting?

This last question came because my rye grass was planted in October, and survived under the snow over the cold New York winter, only to grow again in the spring to a height taller than me.

Well the answer, dear friends, starts with the fact that my rye grass is improving my soil’s structure. And contrary to popular belief, it is actually increasing the nutrition in my soil.

I also think it’s beautiful and it gave me a lot of enjoyment. Growing up in the Canadian prairies, I am quite partial to grass. But this is besides the point, isn’t it?

Let’s get into the heart of the matter. The idea to grow a rye grass cover crop came from my innovative garden club. 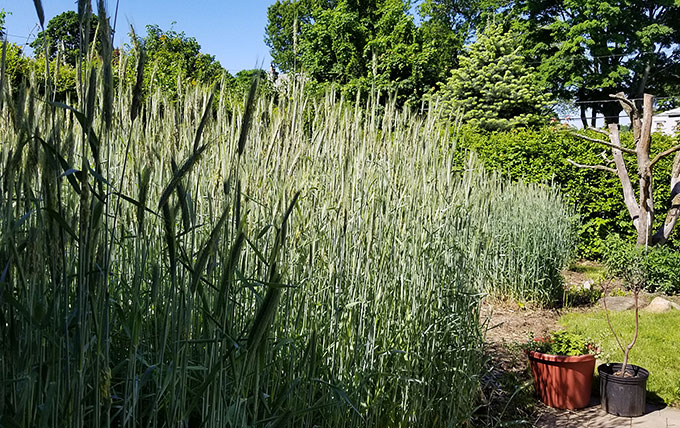 The goal of my garden club, The Bionutrient Food Association, is to increase the quality of America’s food supply.

This statement may sounds fairly innocent or obvious, but it isn’t at all. This idea is exceptionally novel, and many people don’t even realize it’s a problem that needs solving.

As you know, ever since the advent of industrialized farming starting in the 1940s, farmers have been moving away from traditional approaches to farming.

The traditional approaches almost certainly included growing a rye grass cover crop, or other cover crops grown solely for the purpose of feeding the soil. Without cheap chemical fertilizers, farmers were forced to rely on nature to do the work.

Today, these techniques have been replaced with monocropping, which means growing the same crop year after year in the same soil with the aid of chemical fertilizers (nutrition), herbicides (to kill weeds), fungicides (to kill diseases), and pesticides (to kill predatory insects). 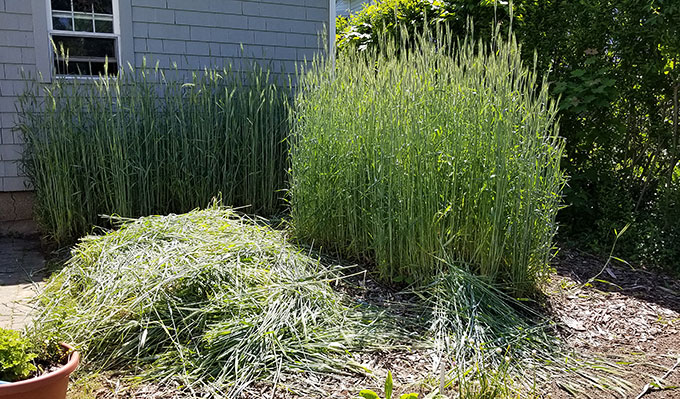 If this sounds a little insane, all this killing I mean, well I think it is.

Regular use of all these chemicals has, unsurprisingly, rendered our soils lifeless. Farmers keep using the chemicals because they can’t grow anything otherwise. It is a vicious cycle that can only be broken by techniques like growing a rye grass cover crop.

It is important to realize how alive our soils are meant to be.

This is important, because poor soil means less nutrition in our food, and less diversity to fuel our bodies with.

Have ever wondered why your carrot or cucumber tastes dull, or flat, or just weird?Click To Tweet

If you have ever wondered why your carrot or cucumber tastes dull, or flat, or just weird, this is the reason.

And nobody is really measuring the quality of our food supply. We’ve been preoccupied with yields and resistance to pest and disease. Nobody has cared about flavor, until now 🙂 .

When you taste food that has been grown in healthy soil, it will knock your socks off. It is rare to find, but it should taste alive, and burst with complex flavor.

I Learned My Lessons the Hard Way: No Flavor

This is my third year of gardening in my 600 square-foot backyard patch. To give you an idea of its size, I have 14 garden beds that are about 3 feet wide by 12 feet long on average (some are larger).

It gives me plenty of room to experiment, and that is about all I do.

I had never gardened before in life, so it is all a process of learning. Part of it is that I decided that I wanted to move toward a fully sustainable garden system.

It doesn’t make sense to me to have to add fertilizers and other material that comes from outside the garden, or at the very least outside a reasonable local perimeter.

But just like when we want to take charge of our own health, it takes time to build up a healthy fertile growing environment.

But this is what the world needs more of, and it will take much work and dedication. There are pockets of farmers around the world working in this direction. Their movement is known as regenerative farming, or agro-ecology. 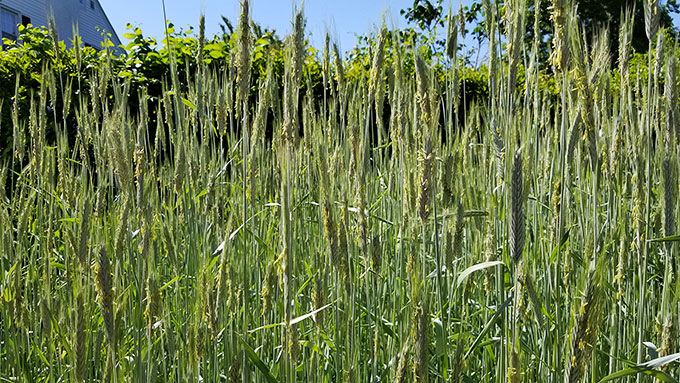 When I started gardening my first year, I was totally naive about fertilization. I believed the soil would just support the plants, but it didn’t.

Surprisingly, my beautiful garden food didn’t taste like much, similar or worse to what you typically buy in a grocery store.

I had piled up tons of organic matter, new top soil, and manure to create the garden, but it wasn’t enough. I also wasn’t able to grow any root crops, or produce large vegetables like eggplant and squash. There wasn’t enough fertility to support it.

In year two, I did a simple soil test and found my soils were highly deficient in the major macro-nutrients of nitrogen, phosphorus, and potassium.

These are the big three that chemical fertilizers focus on, but I was aware there are also countless minerals, trace minerals, and species of microbial life and other soil organisms that I needed to support.

So I added a good amount of slow-release organic fertilizer, homemade compost, organic approved bone meal, alfalfa meal, and some other minerals.

The result in year two was like night and day. The flavor was awesome! I was excited, but still not satisfied with my methods. 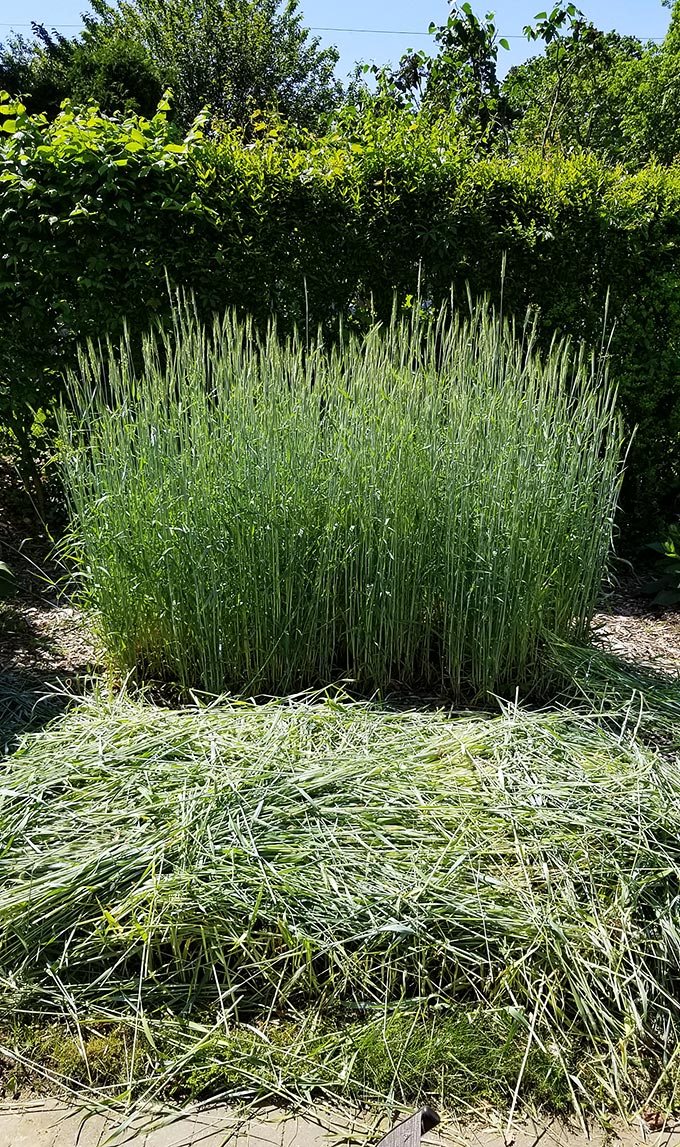 Why I Planted My Backyard Rye Grass Cover Crop

This year’s major garden improvement was to plant cover crops last fall. I planted some beds with summer cover crops that fixes nitrogen into the soil, but die down over the winter. These beds were the first ones I planted this spring, since they were ready.

After that, my six beds of rye grass got all my attention.  I watched the grass consistently grow taller, despite the changeable weather. Between the humidity, rains, and scorching sun of springtime, the grass grew tall and beautiful.

I was waiting for the moment when I could cut it down. I’ve started tomato plants, pepper plants, and eggplants from seed, and they are growing up and waiting for those rye beds to be ready to plant.

Rye is actually a perennial crop, which means in nature it comes back every year on its own. However, when you cut it down at its base during its “milky stage,” before it fully forms grain, all the nutrition the plant has gathered through its roots with the help of photosynthesis remains in the soil.

While growing, the plant actually transforms the chemical structure of the biological life in the dirt, and makes it more available. You can liken it to the plant metabolizing the earth.

After I cut it down, the stalks of the long grass were kept on the bed to dry out and turn into straw. This straw will stay there to trap moisture and protect my tomato plants from weeds. To plant, I’ll just move the straw away with my hands to create a space for each transplant.

The rye’s roots also remain in the dirt, and these are quite deep. As the roots break down, they become food for the soil’s organisms. The decomposing roots create channels for oxygen to get in, further supporting the life of the soil. 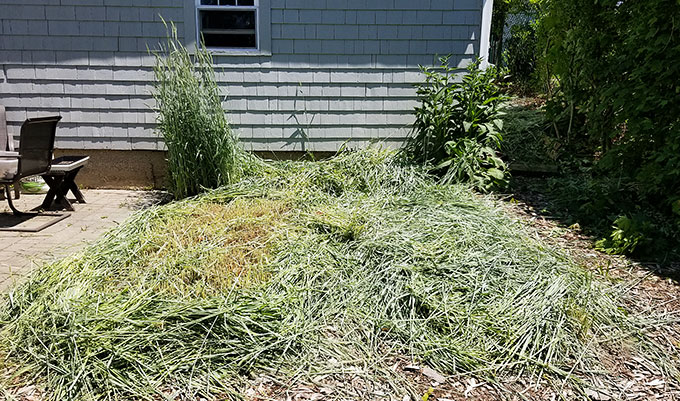 On personal reflection, I believe that since we absolutely depend on nature for our sustenance, as well as all the material goods we use daily, it won’t work for us long-term if we destroy it.

Mother earth is hurting, and to fix it, she asks a lot of us. In my experience working my garden, we must be willing to continually learn and reflect in order to bring harmony to this relationship.

I think the other gardeners who didn't understand my rye grass cover crop haven’t yet thought a lot about what it means to live in harmony with nature.

We tend to fill mark out our garden spaces and fill them with store-bought soils, fertilizers, and plants, and if anything else (weeds) dares to grow there, we pull them and discard them without another thought. We insist that things will be our way.

But nature isn’t meant to be controlled. I think nature wants to dance with us if we can only learn her language.

Planting my rye grass cover crop is my way of trying to learn how nature speaks. I look forward to seeing how my tomato plants fare in these new beds. I’ll let you know next time how it goes.

Hi. My name is Andrea. I started Buttered Veg to help others find balance through mind-body cooking. If this makes you smile, you are definitely in the right place.   Learn More...